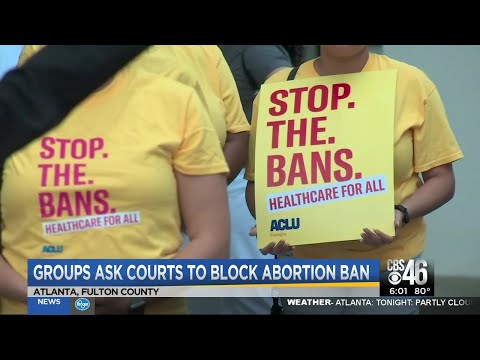 %3Ciframe%20allow%3D%22accelerometer%3B%20autoplay%3B%20encrypted-media%3B%20gyroscope%3B%20picture-in-picture%22%20allowfullscreen%3D%22%22%20frameborder%3D%220%22%20height%3D%22315%22%20src%3D%22https%3A%2F%2Fwww.youtube-nocookie.com%2Fembed%2FrHclvoU3TMs%3Fautoplay%3D1%26version%3D3%26playsinline%3D1%22%20width%3D%22560%22%3E%3C%2Fiframe%3E
Privacy statement. This embed will serve content from youtube-nocookie.com.
ATLANTA, Ga. (CBS46) -- At the start of business Tuesday morning, women's right's advocates and the American Civil Liberties Union of Georgia filed a motion asking a federal judge to block the Heartbeat Law from taking effect at the start of the new year.
This motion asks for a preliminary injunction, stating that HB481 contradicts Roe v. Wade
“By banning virtually all pre-viability abortions, HB481 is blatantly unconstitutional under nearly 50 years of Supreme Court precedent,” said ACLU of Georgia legal director, Sean Young.
The women's reproductive rights group “SisterSong” is the lead plaintiff on the lawsuit that is currently moving through the courts. They hope this latest filing could help push a decision ahead of the other lawsuit that could take longer.
“Typically, when a party files a motion for preliminary injunction, a court will hold a hearing in time for the court to act on that request,” Young said.
In a press conference Tuesday afternoon Sister Song and other activists called out the bill’s sponsor, Representative Ed Setzler (R-Acworth), who recently posted a racially charged tweet about the group saying in part, "with 19 million black children killed since 1973, I'm sad that SisterSong is suing to continue the killing."
“What is sad is there are people like him who question Black women's leadership and try to speak on behalf of Black communities,” said SisterSong executive director Monica Simpson in the press conference. “What is sad is that there are too many politicians that don't have a uterus that think that they have the right and the ability to make decisions on behalf of our reproductive lives,” Simpson went on.
Setzler’s tweet sent the activists from the groups, many of whom are black women, into statements about race and respect.
“The author and proponents of this law do not get to invoke the struggles of black people in America to support this law's cruelty, particularly when we are not protected with the same passion that Confederate monuments were protected during this last legislative session--shrines to our very subdigation and torture,” said Kwakelyn Jackson, the executive director of the Reminist Women’s Health Center, another plaintiff in the lawsuit. “Under this law, we know who will be harmed the most and that is black women and people of color,” Jackson continued.
CBS46 reached out to Rep. Setzler’s office several times via email and phone Tuesday throughout the day. He spoke about the issue on a radio show, but did not respond to CBS46 before the 6 p.m. newscast.