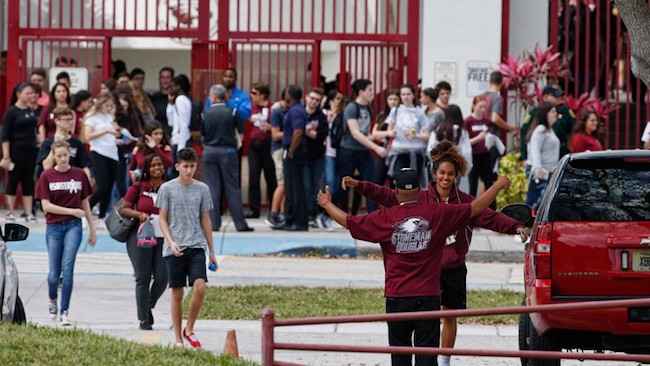 Marjory Stoneman Douglas High School in Parkland, Fla., on Feb. 28, 2018.
The Atlanta-based ACLU of Georgia sent its first letter demanding that a school district reconsider how it disciplined a student who walked out of school in protest of gun violence.
The organization on Wednesday sent a letter to the Liberty County School System in Hinesville, Ga., after a sophomore at Bradwell Institute received a five-day suspension for walking out of school in protest after the Feb.14 Florida school shooting that killed 17 people.
The organization’s advocacy on behalf of the student comes as students across the nation are protesting gun violence. Schools in metro Atlanta are preparing for massive student walkouts next week as part of a nationwide demonstration.
The state ACLU said the Liberty County student left the school  during a break between classes and crossed the street to protest for 17 minutes. In response, the ACLU said she received a five-day out-of-school suspension for “student incivility-insubordination” which the legal organization contends is an unconstitutional and “wildly disproportionate” punishment because it is far longer than a one day in-school suspension that the student’s mother was told is the typical punishment for an unexcused absence.
The ACLU asked the school system to “immediately” allow the student to return to class this week and expunge the discipline from her student record.
“Alternatively, you should reduce her punishment to the equivalent punishment that any other student would receive for being absent from school without excuse for less than an hour, and if [she] has already served that punishment, she should be allowed to return to class immediately,” the letter stated. “We understand that school principals have an exceptionally difficult job, as you strive to ensure that all students are able to learn in a safe environment. But a five-day suspension for 17 minutes of peaceful protest is way out of line.”
The ACLU criticized the school district for punishing the student for “insubordination.”
“...[R]efusing to speak exactly in the way that government authorities want you to speak is not called ‘insubordination,’ it is called free expression, and it is protected by the First Amendment. Nothing obligated [the student] to meet with school administrators to discuss in advance how she should exercise her speech, and nothing obligated [her] to agree with how the school would have preferred that she exercise her speech,” the organization wrote.
The school district responded to a request for comment by providing a statement it also sent to the ACLU.
The statement said: “The Liberty County School District places a great deal of importance on the safety of its students and staff and is sympathetic and understanding to the concerns about the Parkland, Florida incident. The code of conduct clearly outlines consequences for classroom and or school disturbances. In reference to the student who protested the Parkland, Florida incident; the student was dealt with in accordance with the Liberty County School System Code of Conduct.”
A state ACLU spokeswoman said this is the first letter the organization has sent to a school district in response to a student walkout-related complaint.