The American Civil Liberties Union filed a federal lawsuit Friday morning accusing Glynn County, Sheriff Neal Jump, Magistrate Judge Alex Atwood and attorney Reid Zeh for the parts they play in what the group alleges is “an unconstitutional cash bail system that discriminates against people who are financially strapped.”

The class-action lawsuit is brought on behalf of Margery Mock and Scott Ogden — both of whom were in the Glynn County Detention Center after arrests for criminal trespassing Wednesday — and other people detained in Glynn County for misdemeanor offenses because they cannot come up with the money to bond out of jail.
At 5 p.m. Friday, ACLU of Georgia Legal Director Sean Young announced Mock and Ogden are to be released. 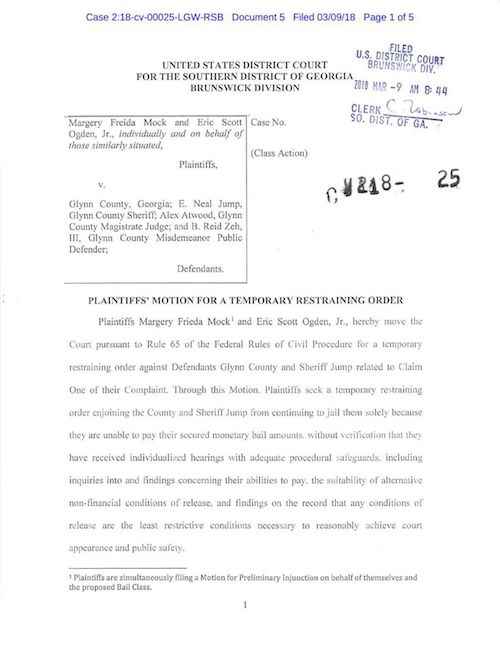 “We have just learned that a court has ordered our clients’ release, though we still await news of actual release from our clients,” Young said in a statement. “And we will continue to push forward with this class action. Every single day, Glynn County throws people like Ms. Mock into jail simply because they cannot afford the predetermined cash bail required.
“We are moving forward with this case to ensure equal justice for all.”
Mock was jailed under a $1,256 bond and Ogden faced the same amount. The complaint lays out the process.
“A person arrested in Glynn County who can afford to pay the predetermined monetary amount is immediately eligible for release from jail upon payment (except those facing Family Violence Act charges),” according to the complaint. “Those arrestees who cannot afford their release may remain in jail for weeks, even months, without being afforded any hearing to meaningfully argue for their release.
“Moreover, persons accused of misdemeanors who cannot afford to pay bail or hire a private attorney are deprived of the opportunity to request an adversarial preliminary hearing to seek their release, either by challenging probable cause for their arrest or requesting lower bail. They are further denied the ability to bring subsequent motions or habeas petitions to modify or reduce bail through counsel. 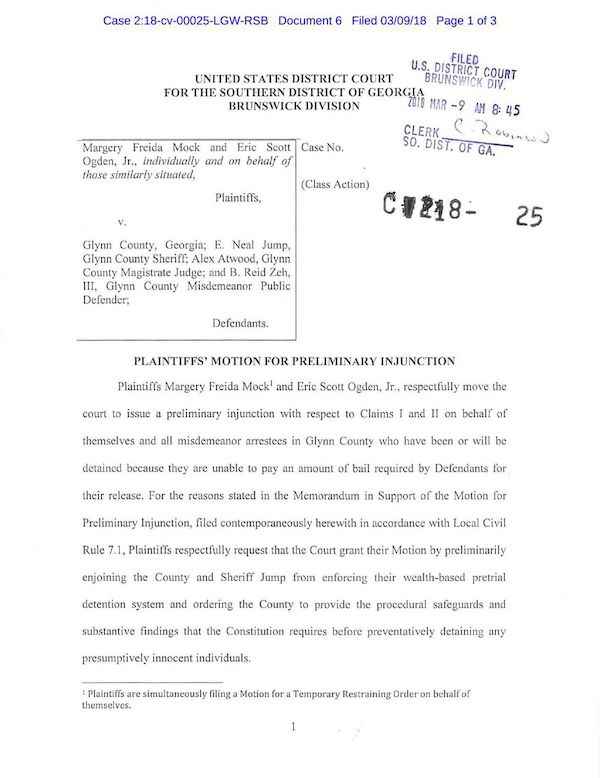 Click here or the image to read or download the pdf.
“In fact, the only process available in Glynn County for misdemeanor arrestees who cannot afford their monetary bail or to hire private counsel is a hearing to enter a guilty plea and face sentencing.”
The complaint then points to Zeh, who serves as the state court public defender. State court usually handles cases that involve misdemeanors only.
“None of these plaintiffs can afford to hire a criminal defense attorney,” according to the complaint. “They are therefore eligible for representation only be defendant Zeh as a public defender. However, plaintiffs have never met with Zeh, who has a policy of not visiting public defense clients in the detention center, representing clients at their bail-setting hearing or requesting a preliminary hearing or bail-modification hearing on their behalf.”
A message left for Zeh was not returned as of press time. Jump did not return a phone call Friday.
Atwood said the processes for setting bail were already in place when he took the bench in 2017. As a state legislator, lawyer and judge, he said has always striven to follow the constitution and due process.
In all, the county, Atwood and Jump are alleged, by administering the cash bond procedure, to have violated the 14th Amendment regarding equal protection and due process, and the county and Zeh are accused of violating indigent misdemeanor arrestees’ 6th Amendment right to counsel and equal protection through counsel.

James Yancey is representing the plaintiffs in U.S. District Court in Brunswick, along with Young, Kosha Tucker, Andrea Woods, Twyla Carter and Brandon Buskey. Yancey filed the class certification motion Friday, along with a temporary restraining order motion and motion for preliminary injunction on behalf of similarly situated detained defendants who face only misdemeanor charges and cannot afford to bond out.

U.S. District Court Judge Lisa Godbey Wood set a hearing for March 15 at 9:30 a.m. for the TRO and injunction motions.