How the ACLU became a force in Georgia

ACLU of Georgia Note: It has been a productive year for the ACLU of Georgia. So productive, the Atlanta Journal-Constitution took note and printed the article below on its front page this week. This was a team effort, with the critical work of our coalition partners and the team at the ACLU of Georgia, especially: our lobbyist, Chris Bruce; Political Director, Burrell Ellis; Communications Director, Ana Maria Rosato; as well as Sean Young, Legal Director.

With your support, we will continue to fight to protect and extend civil rights and civil liberties. We will use all the tools we have—litigation, legislation, community education, communications; advocacy and voter mobilization to create a more perfect union.

In recent years, the American Civil Liberties Union was more of a political punching bag than a force in Georgia. 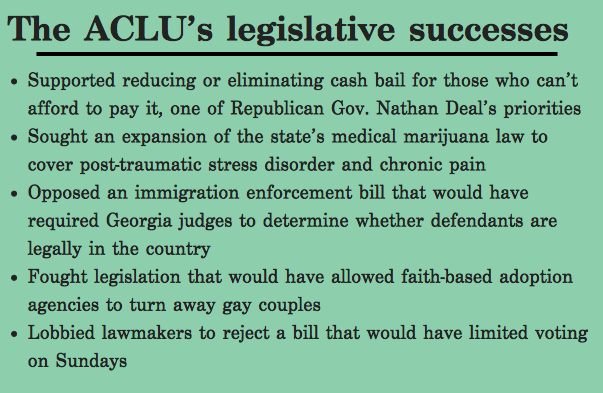