A federal judge on Wednesday redrew voting districts in a South Georgia county where African Americans make up a majority of the population but control just two school board seats.

U.S. District Judge W. Louis Sands created four districts in Sumter County where more than 60% of the voting population is made up of African Americans, giving them a better chance to win a majority on the seven-member school board.

Sands also eliminated two at-large districts that were elected countywide and are held by white school board members.

The judge found that the school districts had disempowered black voters and violated the Voting Rights Act, the landmark 1965 law that prohibits racial discrimination in elections.

The case arose from redistricting that created two at-large districts, flipping the school district’s 6-3 African American majority to a 2-5 minority in elections in 2014. The districts were challenged in a lawsuit filed by a Baptist preacher.

“This ruling is a victory for the parents and children of Sumter County who want an equal say in their education,” said Sean Young, an attorney for the American Civil Liberties Union of Georgia. “At-large districts have traditionally been a racist tool for preventing black voters from electing candidates of their choice. The court today has eliminated those at-large seats.”

An attorney defending the Sumter County elections board said he plans to appeal Sands’ ruling.

The attorney, Mark Braden, said the current school district maps in Sumter County already give African American voters an opportunity for fair representation. He said African American candidates have won majorities in countywide elections for governor and the U.S. Congress.

“There’s no reason to believe an African American couldn’t win countywide in the race for school board,” Braden said.

The court’s ruling also moved school board elections from May to November, when voters are more likely to turn out, Sands wrote. 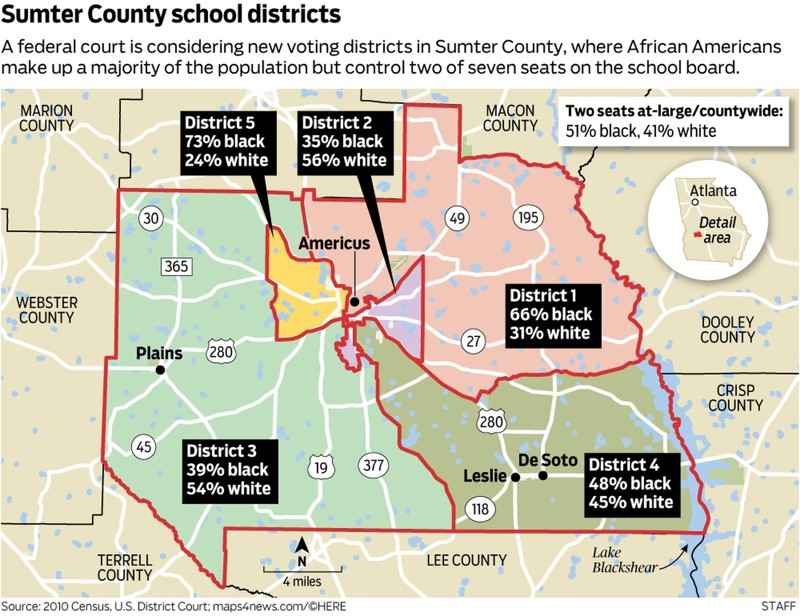 Mathis Kearse Wright, the Baptist preacher and plaintiff in the lawsuit, said the court recognized that the county’s African American majority should have a chance at more equitable representation on its school board.

“We now have what we set out for, which is just to have an equal opportunity to be elected,” Wright said. “We’re not looking for a handout or an upper hand. This plan gives us that equal opportunity.”

Besides the three majority African American districts, the remaining three districts have a much smaller population of black voters, between 30% and 35%. Overall, the county’s population is about 51% black and 41% white, according to Sands’ order.

At least 14 girls were arrested in 1963 during a nonviolent civil rights protest in Americus, the county seat, and held in the Leesburg Stockade for weeks.

Today the nonwhite population of students in the county’s public schools is 86%, overseen by a school board with two of seven, 29%, members who aren’t white.

The court case relied on a section of the Voting Rights Act left intact after the U.S. Supreme Court decided in 2013 that Georgia and several other states with a history of discrimination no longer had to obtain federal permission to change how elections are conducted.

But the Voting Rights Act still prohibits discrimination based on race, which Sands used to make his ruling.

Sands acknowledged in his decision that the maps he ordered won’t guarantee that African Americans will regain a majority on the school board. Nonwhites make up a slight majority of the county’s overall population and less than half of its registered voters.

“The court is satisfied that a remedy that gives such voters a strong chance at three seats and a fair chance at a fourth is sufficient,” Sands wrote.