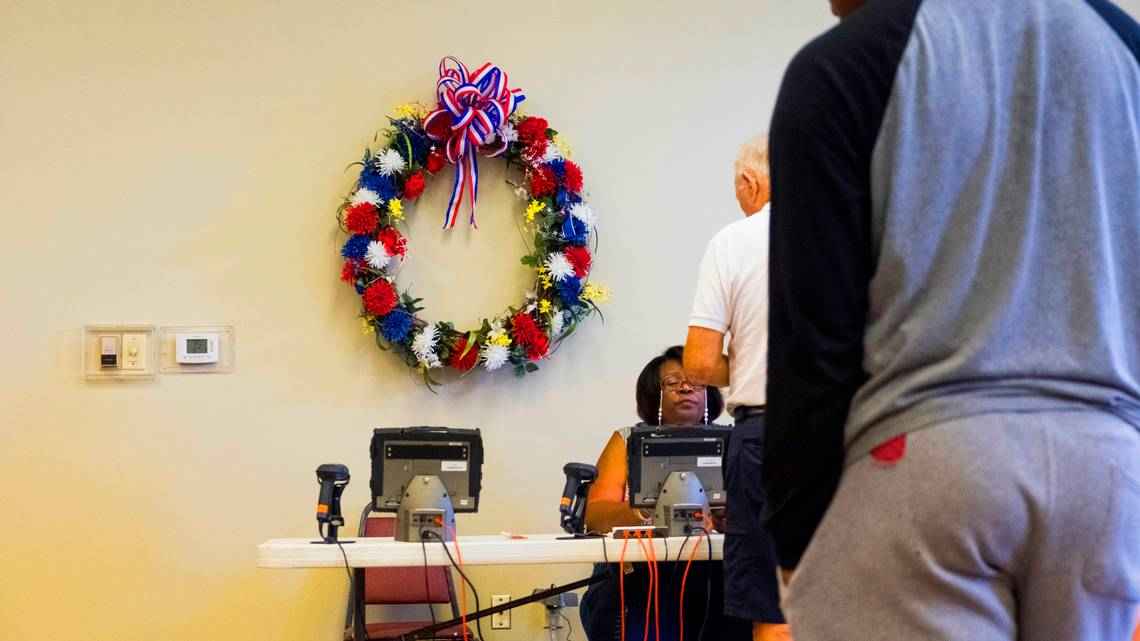 Checking voter identification against state voter records at a polling place in Lizella on May 22. Grant Blankenship | Georgia Public Broadcasting

Stephanie McClure, a professor of sociology at Georgia College & State University in Milledgeville, had a simple plan.

She and other members of the Middle Georgia Progressive Women activist group would head out to a Baldwin County High School football game with a stack of voter registration forms and sign people up. But when a friend went to the office of the Baldwin County Registrar to pick up the forms, they hit a road block. The forms asked for proof of residency, such as a photo ID, to register.
“And I was like, ‘Oh that’s tough!’” McClure said. “I think we’ll need like a scanner or a copier or something at the football game if we want to register people.”
But McClure dug around a little and got the voter registration group Georgia Shift involved. They in turn told ACLU Georgia and found the form was dead wrong about photo ID requirements.
What the registration form doesn’t reflect is that for over a decade, a Georgia voter has been able to wait until Election Day to produce a photo ID to prove they are who they say they are. Now, ACLU Georgia wants Baldwin County to print registration forms in line with the law. But Randy Morrow, the chief deputy registrar of Baldwin County, said that’s the job of the Georgia secretary of state.
“Baldwin County has no control over this,” Morrow said. “This is a state form. We don’t print it. They print.”
That’s true. The secretary of state’s office issued a timeline for printing and mailing new forms, but it seems unlikely that those forms would be disbursed before the deadline for registration on Oct. 9. Morrow said his understanding was that he wouldn’t get new forms until he worked through all the old ones. In the meantime, the secretary of state’s office said old forms are stacked high in every election office in the state. The online form was only updated by this August.
Randy Morrow said that’s why you’re better off working with people, like him, who can navigate the forms.
Stephanie McClure disagrees.
“I don’t think you should have to be a guru with a finetooth comb to figure out how to register people to vote,” she said. “It shouldn’t be that complicated.”
In a letter to Baldwin County and the secretary of state, ACLU Georgia said they have concerns Registrar Randy Morrow is still asking for photo ID to register to vote. The Secretary of State’s Office is investigating.