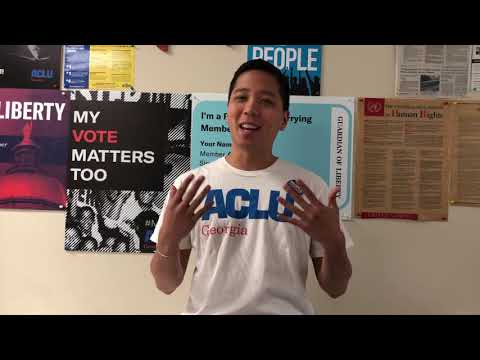 Click the video to hear Sean J. Young, ACLU of Georgia Legal Director, explain what this case is about.

ATLANTA – The ACLU of Georgia sent a demand letter to the leadership of the State Legislature and the Capitol Police insisting that they protect the Freedom of Expression in the legislative galleries. Last year, Georgia Capitol Police prevented several students from entering the legislative galleries simply because they wore t-shirts and buttons with “March for Our Lives” messages on them.

Preventing people from wearing expressive clothing in government facilities is unconstitutional. Courts have protected the Freedom of Expression of students who wear black arm bands in public schools, Hari Krishna devotees who wear religious garb in airports, and an individual wearing a jacket with vulgar language in a courthouse.

The Georgia legislative galleries overlook the House and Senate chambers where legislators introduce, debate, and vote on bills. Constituents have the right to watch their elected officials during this democratic process.

“The First Amendment protects every constituent’s right to wear clothing expressing their opinions when watching their legislators engage in the democratic process,” stated Sean J. Young, legal director of the ACLU of Georgia. “We simply ask that the leadership and Capitol Police uphold this constitutional right.”

The ACLU of Georgia filed a successful federal lawsuit last year requiring the Capitol Police to allow people to bring handheld signs into the State Capitol Building in accordance with the First Amendment.