TIMELINE of EVENTS in the WRONGFUL KILLING of AHMAUD ARBERY

February 23, 2020
Gregory and Travis McMichael shot and killed Ahmaud Arbery, a 25-year-old Black man, who was jogging during the day in Brunswick, Georgia.
Click to continue reading the Timeline of Events. 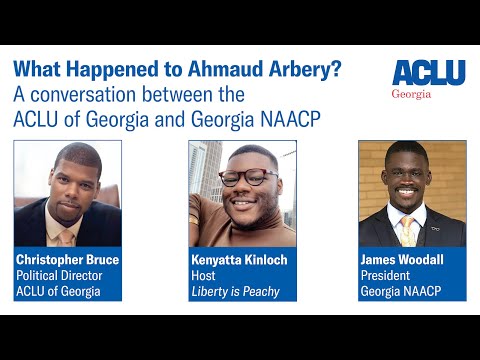 What Happened to Ahmaud Arbery?
In the afternoon, on February 23, 2020 Ahmaud Arbery, a 25-year-old black man was jogging through the Satilla Shores neighborhood -- minutes away from his own home -- in Brunswick, Georgia, when two local white men -- Gregory (64) and his son Travis McMichael (34) -- shot and killed him. According to a letter from one of the District Attorneys involved in the case, Bryan William, another white man, filmed portions of the killing.
Click here to continue reading.

Listen to “What Happened to Ahmaud Arbery? A conversation between the ACLU of Georgia and NAACP Georgia."

‘Your time is up’: Hundreds demand DAs resign over Ahmaud Arbery...

Ahmaud Arbery's family tells CBS46 they want justice for the...

Prosecutor is Urged to Indict Men in Ahmaud Arbery’s Death