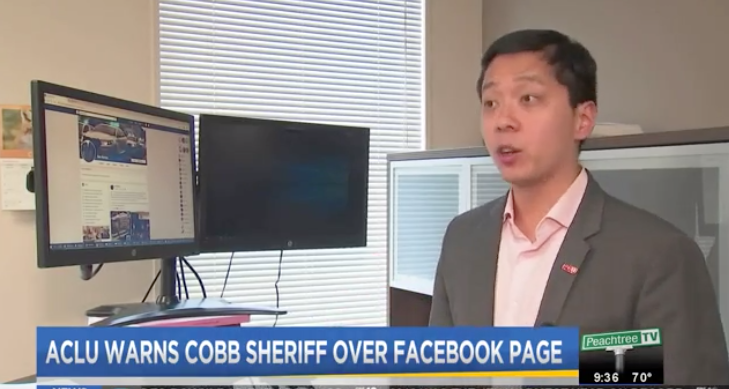 MARIETTA, Ga. – The American Civil Liberties Union of Georgia is questioning the actions of the Cobb County Sheriff’s Office after a former sergeant with the department claimed he was blocked in response to a post he published on Facebook.

According to the ACLU, former Cobb County Sheriff’s Office Sergeant James Herndon posted a comment on the Facebook page of Sheriff Neil Warren that said food the sheriff’s office was selling at a county fair came from a prison unit that was heavily infested with rats. Herndon and the ACLU said his comment was deleted and he was blocked after the post was made.
While the Sheriff’s page is a Facebook profile page similar to the ones many Americans have and not a fan page; the ACLU asserts in a letter to Sheriff Warren that the page, “is clearly being used for government purposes, because it publicizes and promotes the work of your office.” The ACLU said because some users designated as friends can post comments while others are blocked, “This virtually guarantees that the only comments being posted on your county’s government social media page will be positive.”
The ACLU said in its letter that courts have ruled against any “targeted censorship on government social media pages otherwise open for public comment is a violation of the First Amendment, regardless of the government official’s position.” Cases dealing with the issue have involved officials at all levels of government including the President of the United States.
According to the ACLU’s letter, failure to comply with the legal precedents could lead to lawsuits and payments of up to $65,000.
The ACLU suggested Sheriff Warren create two pages, one for government purposes and one for personal usage. Sheriff Warren would then be able to block who he chooses on his personal page, according to the ACLU. The ACLU also offered in the letter to work with Sheriff Warren on a social media policy.
CBS46 has reached out to the Cobb County Sheriff's Office for comment on this story and will update the story as soon as it is received.